PRESQUE ISLE, Maine — Standing in solidarity with protesters around the country, more than 30 individuals gathered Saturday next to the bridge that overlooks the Aroostook River on Main Street in Presque Isle to rally against gun violence and in support of safety in schools.

“I don’t like hearing about children getting murdered,” Arthur Jones of Woodland said during the protest as he held up a sign that said “Arms are for Hugging” on one side and “Protect Kids!! Not Guns!!” on the other.

“This is not about rights, it’s about gun manufacturers blackmailing politicians,” he said. “Enough is enough.”

The event in Presque Isle was one of at least 15 “March for Our Lives” rallies held across the state Saturday, including in Bangor, Portland, Bar Harbor and Lewiston. Hundreds more solidarity marches and rallies were held around the country and the world, including in Parkland, Florida, site of the Feb. 14 shooting at Marjory Stoneman Douglas High School that left 17 students and staffers dead.

The bloodshed from that school shooting and others has sparked numerous protests calling for an end to gun violence and stricter gun control laws. 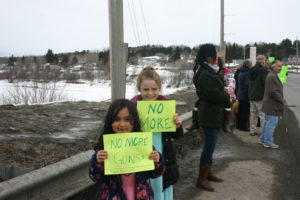 Saraphina, 4, and Mariam, 7, Persaud and Audrey Davis, 8, participate in the March for Our Lives rally in Presque Isle on Saturday, March 24.
Staff Photo|Melissa Lizotte

Protesters in Presque Isle Saturday stood along the busy roadside near the Aroostook Centre Mall facing the traffic and displaying signs with sayings such as, “It’s Time for Compromise,” “Enough” and “It Could Have Been Your Child.”

Retired Presque Isle High School Librarian Gretchen Asam of Presque Isle held up her own sign that read,“Save Your Children” on one side and “Presque Isle, Maine” on the other. She said she attended the rally in support of safety for all students.

“People are dying in school and they shouldn’t be,” Asam said. “We have more murders happening in schools than any other country and that’s ridiculous.”

About two and a half hours south at a rally in Orono, Elijah McGill and Emily Innis, both Orono High School students, said that marchers there were seeking three things from Congress: a ban on assault rifles; a ban on high capacity magazines; and universal background checks on gun sales.

Petitions asking for Maine’s congressional delegation to support such measures were circulated at events around the state. 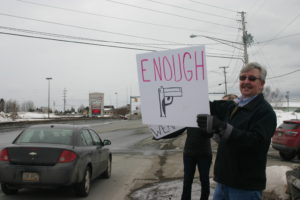 Paul Barrett holds up a sign that says “Enough” during the March for Our Lives rally in Presque Isle on March 24.
Staff Photo|Melissa Lizotte

The afternoon rally in Presque Isle drew support from both younger and older generations, with the youngest protesters Seraphina Lavado, 4, Miriam Lavado, 6, and Audrey Davis, 8, holding up their own small cardboard signs that said “No More Guns” and “No More.” They later drew up another sign that said, “Guns Are Poop.”

“We were on our way to a sensory playgroup and remembered that there was a national protest going on around the country and one here in Presque Isle,” Lillie Lavado, Seraphina and Miriam’s mother, said. “I asked the children if they wanted to go to playgroup or come here and they said they wanted to come here.”

Throughout the rally numerous drivers honked their horns in support of the protesters, who waved to many. Rally organizer Sarah McLean of Caribou used Facebook to make people aware of the protest and said that her support for more gun control has only increased in recent months. 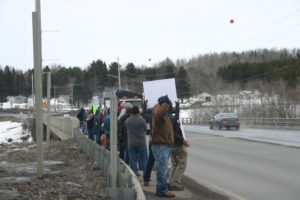 Over 30 protesters gathered near the bridge overlooking the Aroostook River on Main Street in Presque Isle for the March for Our Lives rally on Saturday, March 24.
Staff Photo|Melissa Lizotte

“It’s scary that we’ve had this many shootings this year and it’s only March,” McLean said. “As a psychotherapist, I treat people who have been traumatized in their lives and sadly I think it’s a matter of time before we have a mental health crisis come out of this issue because more students are going to school afraid of what might happen.”

She added, “I think in small communities it means much more to come to events like this than when you’re one out of 10,000 people in the larger rallies. I feel very strongly about having school be a safe place for all students.” 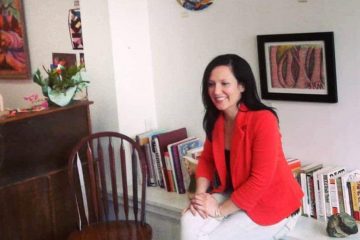 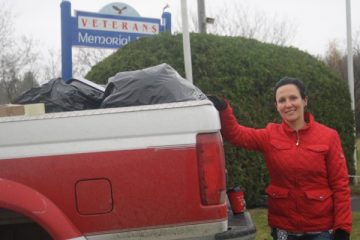